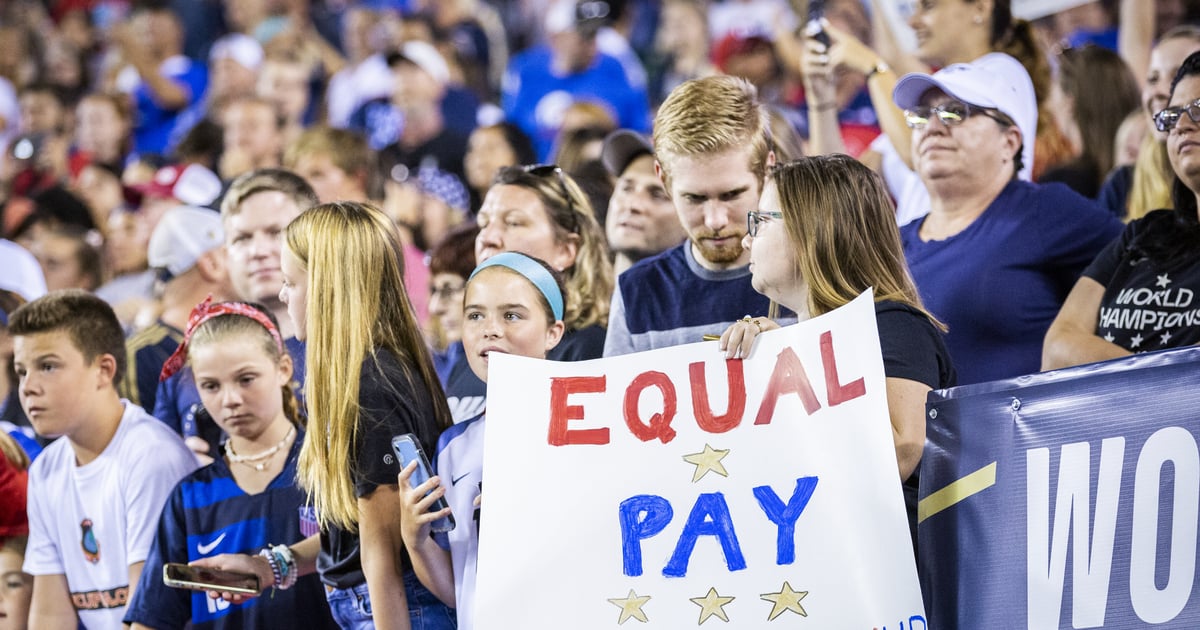 In February, the women of the US Women’s National Team finally got some good news in their fight for equal pay: the US Soccer Federation — their employer, whom they’d very publicly sued for gender discrimination in March 2019 — had finally agreed to a $24 million settlement. In May, their victory became real when they reached an official agreement with the federation that guaranteed equal pay for US soccer teams through 2028.

Whether or not you’re a soccer fan, chances are you already know a lot about the team’s fight for equal pay. In 2016, some of the most recognizable players in the world — Megan Rapinoe, Alex Morgan, Carli Lloyd, Hope Solo, and Becky Sauerbrunn — filed a wage-discrimination complaint with the Equal Employment Opportunity Commission. They publicly called out their bosses and, in doing so, catapulted some of the longest-simmering issues in women’s sports — subpar working conditions, an insulting lack of investment in the women’s game, and, of course, a glaring pay gap — straight into the spotlight. By the time they formally sued their employers three years later, they’d had enough. The women of the USWNT were significantly more successful than their male counterparts (the USWNT has won four World Cup titles, while the men’s national team has won none), but they were flying economy, playing on injury-inducing turf, and earning just a fraction of what the men would have made if they had the same record.

Their fight struck a chord with women across the US, where, compared to the median earnings of white men, Latinx women working full time earn just 58 cents, Black women earn 63 cents, and white women earn 79 cents to every dollar a man makes, according to the Institute for Women’s Policy Research. In sports, that gap is amplified. In basketball, for example, the highest-paid player in the NBA is Steph Curry, whose salary this year is close to $46 million. Meanwhile, the WNBA’s highest-paid players are on contracts that pay them just $228,000. That means that for every dollar Steph Curry makes, Diana Taurasi makes just half a cent.

In every way it manifests, the pay gap keeps women athletes stuck in a cycle that insists they’re worth less.

But salaries are just one piece of the pay-gap puzzle in sports: it gets bigger when you factor in prize money. When France won the FIFA Men’s World Cup, for example, the team took home $38 million. But when the women of the USWNT won the tournament a year later, it came with a check of just $4 million.

Then, there are the endorsement deals. The gap in sponsorship dollars is so massive that a woman doesn’t appear on Forbes’s Highest-Paid Athletes list until Naomi Osaka at number 12. Tennis is one of the few sports that does offer equal pay for men and women at its biggest competitions (shoutout to Billie Jean King and “The Original Nine,” who laid the groundwork for this back in the 1970s). So, when Osaka won the Australian Open in 2021, she made the same amount of money as Novak Djokovic (just over $2 million each). But her overall earnings are still far outstripped by male tennis champions’ where brand sponsorships are concerned. Osaka is the most marketable woman in sports in history — she made $55 million in sponsorships and endorsement deals in 2021. The same year, Roger Federer, the highest-paid male tennis player (who didn’t win a Grand Slam in 2021), brought home $90 million in sponsorship deals.

There are many reasons why this pay gap in sports exists. Critics say women’s sports don’t get as much viewership as men’s sports or draw as many crowds — but they also receive far less airtime and aren’t promoted as aggressively. They say that women’s sports don’t generate as much revenue — but that’s also because women’s sports receive far less investment, and leagues tend to be much younger than their male counterparts (and for what it’s worth, even men’s teams lose money). Then, of course, there’s the argument that women athletes simply aren’t as skilled as male athletes and therefore deserve to be paid less. This sexist stereotype falls to pieces the moment you consider, say, Simone Biles — the most decorated gymnast of any gender in history — or Allyson Felix, who broke Usain Bolt’s record as the most successful athlete in IAAF World Championship history less than a year after having a C-section. In every way it manifests, the pay gap keeps women athletes stuck in a cycle that insists they’re worth less.

It also puts women in sports at a heightened risk for injury and burnout. Smaller checks and sexist stereotypes about their worth mean female athletes hustle harder, working second jobs to make ends meet (rather than training full time) and forgoing the expensive recovery treatments that keep male athletes like Tom Brady playing into their 40s. (Seattle Seahawks quarterback Russell Wilson admitted to spending $1 million on recovery every year in hopes that he’ll be fit enough to play in the NFL for another decade — imagine the longevity an athlete like Simone Biles would have with that kind of extra cash.) The consequences of that hustle can be serious: in the WNBA, players routinely spend their off-season playing in leagues overseas in Europe, China, or Russia. The grind is a recipe for injury; overuse injuries are ridiculously common in the WNBA, according to a 2019 report from Global Sport Matters, and have the potential to keep top players out of the WNBA for an entire season. But as long as players can make up to seven times as much playing overseas, it remains a risk many feel they have to take.

The broken system that is women’s sports is finally getting attention, although it comes at a very high cost. In March, as the Russian war in Ukraine escalated, Brittney Griner was detained in Moscow. In addition to being a two-time Olympian and star forward for the Phoenix Mercury, Griner is also one of the biggest sports stars in Russia. She spends the WNBA offseason playing for elite Russian club team UMMC Ekaterinburg, where she makes a reported $1 million per season. At an airport on her way back to Ekaterinburg, officials reportedly found vaping cartridges in her luggage, and she’s been in custody ever since.

Her detainment sparked immediate protest — had Griner been a top NBA player, U.S. officials surely would have gotten her home by now, some have pointed out. Even more importantly, Griner likely never would have been playing in Russia in the first place if she had the same opportunities as men in her sport. “The same system that rendered a woman who is a generational talent nearly invisible until she was detained in Russia offers a rich ecosystem of income opportunities that are almost exclusively available for men,” Lindsay Kagawa Colas, Griner’s agent and friend, wrote in a recent op-ed for the Los Angeles Times. “Now we have a high-stakes example of how economic disparity can have terrifying consequences.”

When the news of the USWNT’s settlement was announced in February, it felt like we’d finally reached a tipping point. They’d won! Finally! Surely, women in sports must be well and truly on their way to equal pay now, right? The settlement, which will pay $22 million directly to USWNT players, will also create a $2 million fund to assist players in their postplaying career goals and guarantee the women’s team equal pay moving forward. And the pièce de résistance: an equal split of prize money between the USWNT and the US Men’s National Team for any future world-cup prize money.

This is a long overdue victory in the fight for equal pay. I’m proud of the @USWNT for never giving up — on and off the field.

Now, let’s close the pay gap in every industry. https://t.co/XHcHwseA9j

The settlement is a huge win for women’s soccer, and by putting an end to the highest-profile pay battle in sports, it also moves the needle for women in basketball, hockey, golf, and softball. The women of the USWNT proved that it can be done — now it’s time for more leagues to step up.