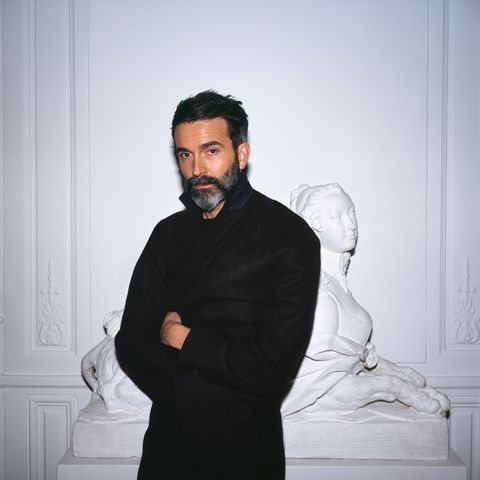 If Daniel Roseberry’s designs came with a recipe, it would boil down to this: seasoning luxury with Surrealism. A few years ago, when the Plano, Texas-raised pastor’s son was at Thom Browne and pitching himself for the role of artistic director of the house of Schiaparelli, he’d taken a measure of what was happening on its runway and the red carpet. He tells me now that it was “all beautiful,” but “way too tasteful.” Where was the next-level conversation in the mode of Elsa Schiaparelli, the house founder who made the first wraparound dresses and power suits, and who produced weird wearables with Salvador Dalí and Jean Cocteau? “I felt like Schiap,” as Elsa called herself, “was more like, ‘What’s beyond beautiful?’” he says.

Roseberry, wearing a thin gray sweater and his ever-present aura of Southern hospitality, is sitting behind his glossy white desk on the Place Vendôme. To his left—against a wall, obscured by a potted tree—the proverbial drawing board rests: Each ready-to-wear and couture collection begins on it, initially as a manifesto. “I get really verbal,” he explains.

The larger project of his tenure has been to recode Schiaparelli’s visual language. He introduced a baroque anatomical iconography to the brand, all those disembodied gold body parts—eyes, ears, noses, mouths—which he describes as a “glorification of physicality.” He adds, “The skeleton dress was the door through which we’re walking.”

That dress, a long-sleeved black gown with figural boning from the ’30s, has its modern equivalent in the sleeveless green number with sculpted abs that Roseberry designed and Kim Kardashian donned. Elsa, though she once made pockets out of lips and gloves with polished-red fingernails, never did Midas-grade nose earrings or nipple buttons.

Speaking of nipples, Roseberry reaches across the white desk to hand me an areola. I think this is from the atelier, at first. It seems to be a plaster prototype for the nipple buttons, or maybe for the gilded pasties Doja Cat wore to this year’s Billboard Music Awards. But the boob detail was custom-made by nature. “It’s a seashell,” Roseberry says, smiling at the ocean’s neat trick.

Courtesy of the designer.

Just two weeks earlier, he had been in Austin for his sister Liz’s wedding. He dressed her in a couture bustier gown with bone motifs among the embroidery—more lovely trickery, as they were convincingly fashioned from mother of pearl and natural shells. He’d also given her an ornate pair of spectacles, which “cried” streams of crystals and pearls (à la tears of joy); the bride passed them around all night for guests to try on and take pictures in. Roseberry had no clue his sister was so talented at TikTok, where the looks went semi-viral: “I got as many people reaching out to me about that as I do when we dress a global icon,” he says.

More and more, Roseberry has become sure of his house voice. He now feels that he has “permission” to occasionally riff on the archive, as he did for fall. There’s a sweater with trompe l’oeil bows that is Schiap ground zero, and a take on the wool evening coat that she created, with porcelain vases for pockets.

Courtesy of the designer.

Overall, the collection is Sunday finest recut as kinky streetwear in denim and leather and velvet with stretch. Hats evoke black holes. One look features a horn; others, stark protrusions from the breasts and buttocks. While the latter may recall the points of Batman’s ears in the iconic portrait by Herb Ritts, what Roseberry had in mind was a hummingbird’s beak. “Edward Scissorhands was kind of a thing,” he says, explaining why his updated evening coat accessorizes its wearer’s fingers with dressmaker’s shears. There are also black opera gloves with superlong fingers—answers to that question of what’s beyond beautiful. It’s the space between reality and fantasy, and it speaks to the “inner kid—the reason why,” Roseberry says, “so many of us are in fashion today.”

They like to think about this a lot at Schiaparelli: “If a child was walking or being carried through the salons, what would that kid be reaching out to touch?”

This article appears in the September 2022 issue of ELLE.

How to Style Black Tights For Any Occasion, From the Office to the Gym
Nails Tutorial #shorts
some viral Tik Tok beauty hacks are better left on that app
16 Deep Conditioners That Do the Work ﻿So You Don’t Have To
FULL COVERAGE Makeup Tutorial