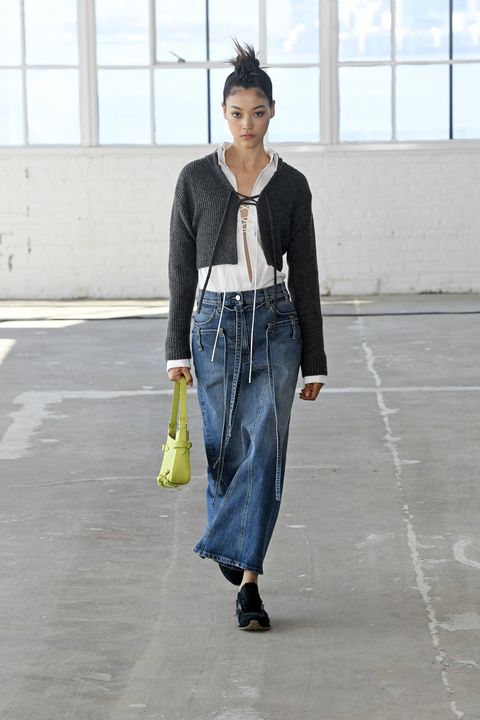 Just when you thought Burning Man was over, Joseph Altuzarra went ahead and brought desert-ready fashion to the runways of New York Fashion Week—tastefully, of course. For spring/summer 2023, the designer looked to Don Juan and Desert Solitaire, an ode to nature in southeastern Utah written by Edward Abbey, neatly wrapped in fabric and left on each guest’s seat at the Starrett-Lehigh Building to take and (hopefully) read.

According to the show notes, the collection “charts the path to mysticism, blurring lines between man and nature, the physical and spiritual.” Altuzarra achieves this via practical and polished pieces like the parka, which opened and closed the show, and sporty layered looks paired with sneakers, modeled by a diverse cast including Paloma Elsesser and styled by Gabriella Karefa-Johnson. (Suddenly, I desperately need a denim maxi skirt.)

Like a trek through the wilderness, the looks went steadily on, the only drama being a model whose foot accidentally slipped out of her sandal. Psychedelic prints, metallic lamé, and shibori tie-dye appeared on dresses, culminating in more parkas made using the centuries-old Japanese technique, and embellished with coins. “The desert, as a catalyst for ideas about possibility, freedom, and myths, is the conduit for a collection that celebrates both pragmatism and the power of imagination,” writes Altuzarra.

Flipping through Abbey’s book when I got home, I came across a quote earmarked with another shred of fabric: “I wouldn’t want to live here. So dry and desolate. Nice for pictures but my God I’m glad I don’t have to live here.” The brutally honest words ring true, especially if you happen to hitch a ride in a camper to Black Rock City. At least this way you can be the best-dressed in the desert.

Claire Stern is the Deputy Editor of ELLE.com. Previously, she served as Editor at Bergdorf Goodman. Her interests include fashion, food, travel, music, Peloton, and The Hills—not necessarily in that order. She used to have a Harriet the Spy notebook and isn’t ashamed to admit it.