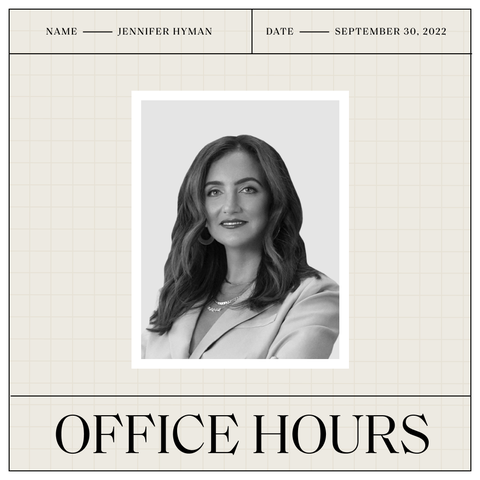 In ELLE.com’s monthly series Office Hours, we ask people in powerful positions to take us through their first jobs, worst jobs, and everything in between. This month we spoke with Jennifer Hyman, CEO and co-founder of Rent the Runway, who first had the idea for the high-end clothing rental service when she was 26 years old, after witnessing her sister drop thousands of dollars on a Marchesa dress at Bergdorf’s, only to wear it once. “I realized what she cared about was the experience of walking into a room and feeling like the best version of herself—she didn’t actually care about the ownership of the dress,” Hyman says. Now, over 124,131 active subscribers rent on her platform, which offers thousands of options from designers like Ulla Johnson, Staud, and LaQuan Smith. “I wanted to give everyone an unlimited closet,” she says. “What I was really building was a Willy Wonka land of fashion.” More from Hyman, a graduate of Harvard College and Harvard Business School, below.

I was a strategy analyst at Starwood Hotels, which owned the W, St. Regis, Sheraton, Westin, and a whole bunch of other properties. I started working there as soon as I graduated from college, which was right after Sept. 11, 2001, so the travel industry was in complete disarray. It was actually a super interesting time to work there, because typically, the most innovation happens when things are tough. That was what I first experienced at Starwood: it was actually pretty entrepreneurial when you got there, since there was really nothing to lose. People were scared of getting on planes and traveling, so management was more open to new ideas than they would’ve otherwise been.

I worked at the talent agency IMG, which is now owned by WME, and I was the only woman in an 80-person division. There was not only rampant sexual harassment, but also it was extremely competitive, because most people there were effectively working on a sales commission. It was a very “every man or woman for themselves” sort of environment. One of the issues I had there was that I actually was pretty successful; I closed deals and made a lot of money, but it was the object of scorn amongst colleagues because I was a very young woman who was bringing in multi-million-dollar deals when some of the older men thought that they deserved to receive the credit. And who did I think I was as this 25-year-old doing this? I actually looked to that experience when I started Rent the Runway, because I wanted it to be the opposite of what IMG was at that time.

Why it’s never a bad idea to pivot

I got what I thought was my dream job at IMG, and I realized, oh my God, I hate every second of it. I realized that the content of the job is so much less important than the people you’re working with, and the culture of that environment every single day. So when I went to business school, and I was taking out hundreds of thousands of dollars of loans to be there, I made one promise to myself: when I graduated, I wanted to be at a job where, when the alarm went off in the morning, I was excited to get up and go do it. Life is not actually filled with as many one-way doors as we might believe it to be. I think there’s a fear that if you start something new—a new job, a new relationship, a new company—that you’re making this forever choice. And the reality is that you’re not—you’re making a choice for right now, and you’re just gonna see as you go. Had Rent the Runway not taken off, I could’ve just gotten another job. But 13 years later, I’m still here.

Why I started Rent the Runway

It was a personal pain point. When my sister was 25, she got invited to her first wedding, so she went to Bergdorf’s and bought a Marchesa dress for a few thousand dollars that put her into credit card debt. I remember being at her apartment and staring at her closet, which was filled with designer clothes that she’d only worn once or twice, and begging her to return the effing dress and instead wear something she already had. She was like, “I can’t. I’ve been photographed in all of my dresses, the photos are up on social media, I need to wear something new.” I realized what she cared about was the experience of walking into a room and feeling like the best version of herself—she didn’t actually care about the ownership of the dress.

I had this big idea about how we could get dressed differently as women, and how we could actually rent aspirational brands and therefore have the freedom to wear all the clothes that we always dreamed about wearing, as opposed to buying all of these items that you’re only gonna wear a couple of times. And to make that accessible to everyone, and give everyone an unlimited closet. What I was really building was a Willy Wonka land of fashion. Growing up, I always thought that the dream was the Clueless closet, and that’s what Rent the Runway fundamentally is.

How I navigated the recession

I had the idea for Rent the Runway in November 2008, and we launched in November 2009. We were in the middle of the last recession, when buying that crazy dress made even less sense. Everyone was under financial pressure at that time, and it was really a lightbulb moment of, wow, there’s no other option. Before Rent the Runway, you had to buy everything that you wore, whether you were going to wear it 100 times or once.

Why sustainability is so important

Fashion is one of the most wasteful industries on earth; 70 percent of negative emissions come from the production of new clothes. The fact that all of us overconsume fashion and buy all these things that we don’t really use that frequently is what’s causing pollution. There are two options as a consumer: you could buy significantly less, and have this capsule collection of things that you wear over and over again, or you could Rent the Runway and wear a different outfit every day. Because those items are being shared amongst our entire customer base, it’s environmentally and financially sustainable. In my opinion, fashion is fun—it’s about self-expression and power. I feel great in clothes that make me feel self-confident. I love the style from Emily in Paris, because it’s very reminiscent of Carrie in Sex and the City—this sense of irreverence and experimenting with fashion. Rent the Runway is about wearing something new without the guilt of waste.

The biggest lesson I learned running my own company

The most important quality to cultivate in yourself, as well as the one to look for in others, is the ability to maintain positivity despite challenging circumstances. We typically call that “resilience” or “grit,” but it is fundamental to surround yourself and build within yourself a feeling that you can do this. Put one foot in front of the other, keep going, and have optimism, because it’s often your optimism that creates success. Positivity is a strategy. If you believe you can do something, you actually do it. It may sound hokey, but I never could’ve dreamed that Rent the Runway would become as big as it has, and I think that I’m proof that you can have big dreams and they can actually happen. The only obstacle that people have is their own lack of confidence in themselves.

Jennifer Hyman, in Oscar de la Renta, rings the Opening Bell in celebration of Rent the Runway’s IPO on Oct. 27, 2021. “This was definitely my best power outfit,” she says.

A highlight of my career

Taking our company public as the 30th woman ever to take her company public in history, and [being a part of] the first company to go public with a female founder/CEO, COO, and CFO. It was so meaningful to create something that didn’t exist in the world before, and know that we built it together. It was especially poignant because it happened in the midst of COVID, which almost killed Rent the Runway since people clearly didn’t have a need for renting dresses or having a subscription to fashion when they were sitting at home wearing sweats every day. The fact that we, with this incredible team of people, were able to save the company, strategically expand it, and then IPO it all during a global pandemic is something I’m grateful for every single day. I’m almost in a state of disbelief that we were able to do it.

This interview has been edited and condensed.

Claire Stern is the Deputy Editor of ELLE.com. Previously, she served as Editor at Bergdorf Goodman. Her interests include fashion, food, travel, music, Peloton, and The Hills—not necessarily in that order. She used to have a Harriet the Spy notebook and isn’t ashamed to admit it.

GENIUS PARENTING HACKS AND BEST MAKEUP TRICKS ||School Funny DIY Ideas and Tips By 123 GO! Genius
Very Easy Updo Hairstyle | Wedding, Bridesmaid, Prom
What Can You Actually Buy at Art Basel Miami?
The 9 Best Jo Malone Scents For Every Mood
Hailee Steinfeld Is Pro-New Year’s Resolutions — but Her List For 2023 Might Surprise You