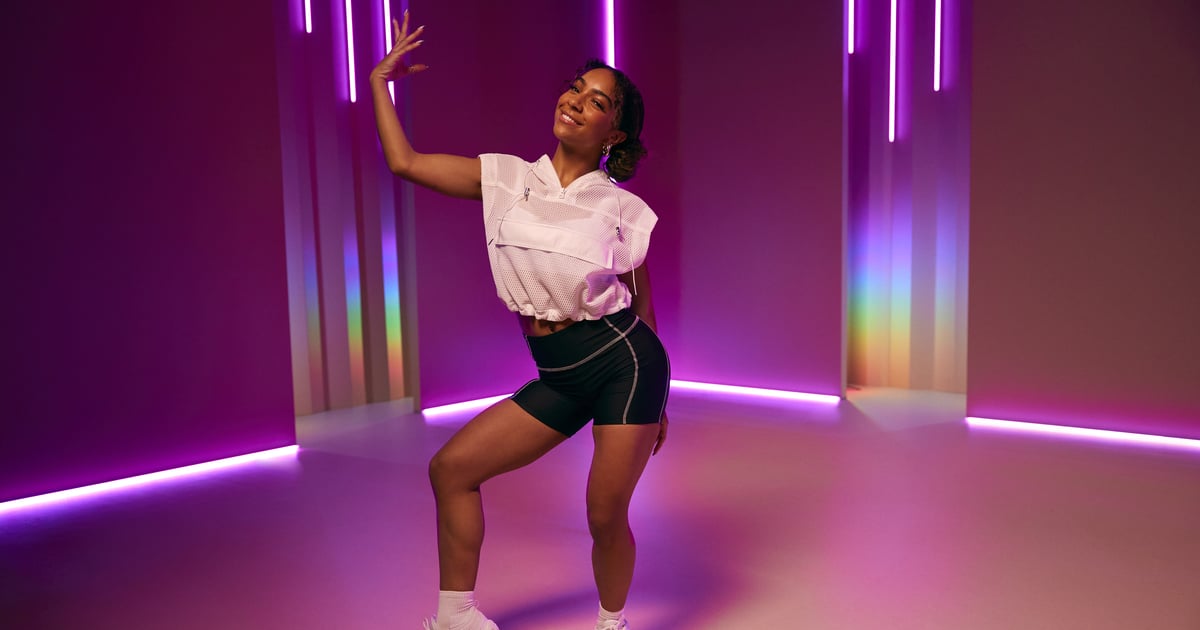 Catch Charlize Glass and the other Dance Fitsugar trainers in new episodes dropping every Friday on the POPSUGAR Fitness YouTube channel.

If you were to trace Charlize Glass’s stardom back to a singular moment, you’d probably end up looking at a random Instagram post from 2014 — one that just happened to be posted by Beyoncé.

Glass was just 12 years old when a video of her slaying choreography to the song “Yoncé” started going viral, capturing attention from the queen herself. “Beyoncé posted a dance video of me on Instagram and tagged me, and I was the first person that’s not her family member that she’d ever posted on her Instagram. . . . It was shock, joy, I couldn’t believe it,” Glass, now 20, tells POPSUGAR.

“I feel like this is the only thing that I’ve known I will do for the rest of my life.”

But that fateful day Beyoncé chose to share Glass’s dance video wasn’t really the start of her time in the spotlight. Prior, Glass had already appeared on “Ellen,” danced alongside Justin Bieber and Ciara, and was a runner-up on the 2012 season of “America’s Next Best Dance Crew” as part of the group 8 Flavahz when she was just 10 years old. But that tap of Beyoncé’s finger catapulted Glass into next-level fame, prompting headlines calling her, for example, the “Second Coming of Beyoncé.”

Getting shouted out by Queen Bey is no doubt a tough act to follow, but Glass has found continued success in the dance and entertainment world — and not as someone’s mini me but as Charlize Glass in her own right. Now she’s joined POPSUGAR as a new host of the dance-workout series Dance Fitsugar on YouTube, where she’s bringing some of those legendary moves to anyone who wants to learn. Here’s how she made it happen, and where she’d headed (besides into your workout routine, of course).

Becoming More Than a 1-Video Wonder

Truly, “America’s Next Best Dance Crew” and the viral “Yoncé” video were just the beginning for Glass. She went on to dance on “America’s Got Talent,” the BET Awards, the Grammys, “The Voice,” and in the 2015 Super Bowl XLIX halftime show with Katy Perry and Missy Elliott. In 2019, she made it to the top three in NBC’s “World of Dance” with her partner, Julian DeGuzman, and just last month, she performed with Nicki Minaj at the MTV VMAs. And that’s just her highlight reel.

Despite the clear success as a dancer, Glass only considers these professional performances to be half of her career. From the Beyoncé post forward, Glass says she realized that social influencing could really be a thing for her. Fast forward to 2022, and it’s definitely working, considering Glass has over a million followers on TikTok and nearly 100,000 on YouTube and Instagram. Right now, a lot of her content includes binge-watchable dance videos, impressive choreography, leveled-up TikTok trends, and BTS peeks at performances, but Glass says she hopes to broaden her niche and include more lifestyle content. After all, being an influencer isn’t just about your talents but about selling yourself as a brand.

Following Her Path Without a Shred of Doubt

No matter where Glass’s career takes her — to POPSUGAR, to the pinnacle of TikTok fame, or back on tour — dance will remain important to her, especially as a sort of safe space. Glass says dance is the place she feels she can really express herself. In fact, you wouldn’t know it from her social content, but she’s actually a bit shy in front of people she’s “not comfortable around.”

“When I’m around my dance friends, and around the dance community, and around those types of people, I feel more free,” she says. “That’s probably one of my favorite things about being a dancer is that when you’re around them, you are never afraid to be yourself and just goof around and dance.”

And she has no doubt it’s what she’s meant to do — whether endorsed by Beyoncé or otherwise.

“I have been discouraged in not getting a gig and stuff like that, but not enough to rethink my career path. I feel like this is the only thing that I’ve known I will do for the rest of my life,” she says. “For me, this is just my path, and I don’t think anything else would fulfill me.”