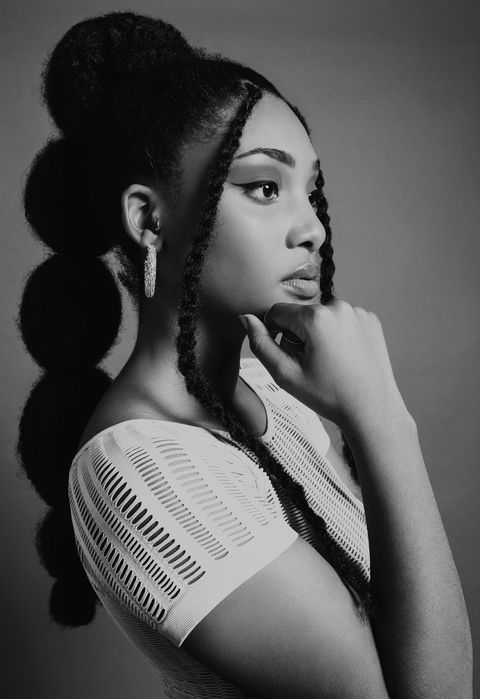 If you’re tired of the same hairstyle you wore all summer, it’s time to give your curls and coils a fall refresh. Pro hairstylist B. Thomas is sharing four of-the-moment ways to reinvent your look and have fun with your curls this season, from amplifying your natural texture to experimenting with puffs and plaits. Keep reading for styling inspiration and the expert-approved SheaMoisture products you need to nail the looks.

This protective style is a playful alternative to braids, and a great way to maximize your volume. It’s up to you how you wear it. Create a single, statement ponytail or multiple around the head and secure hair ties at several points down the length of each (Thomas recommends spacing them 1/2 to one inch apart). Then gently spread the hair between the elastics for the “puff” effect. Before styling, Thomas suggests applying the SheaMoisture Manuka Honey & Yogurt Hydrate + Repair Whipped Curl Cream to damp hair from root to tip. “Not only does the cream moisturize, but it gives subtle definition to the texture of the hair, allowing it to show the natural curl pattern while adding volume for the puffs,” says Thomas.

If you find three-strand braids tricky or time-consuming (or just want to switch things up), add these two strand twists, typically created with braiding hair, to your repertoire. It’s important to use a gel to keep the twists secure and entwined. One of Thomas’ favorites is the SheaMoisture Coconut & Hibiscus + Flaxseed Defining Styling Gel. “It helps meld the two strands and grip the twists without being too heavy or sticky, and adds great shine to the hair as well,” she says. Use it to smooth the roots down and then dab on the lengths as you work on each twist.

Bring some of summer’s laid-back vibe into fall with this version of box braids which incorporates wavy, unbraided extensions for a looser, breezy look. To prevent breakage and tension, Thomas suggests keeping the amount of extensions used proportional to your natural hair. The SheaMoisture Jamaican Black Castor Oil + Flaxseed Black Edge Gel is her go-to product to style this look, because it helps seamlessly blend the natural hair and extensions together, while still allowing the hair to be, as she says, “soft and pliable.”

If you want to give your already fabulous curls some extra oomph, look to products that hydrate and define. On wash day, Thomas recommends starting with SheaMoisture Coconut & Hibiscus Curl & Shine Hair Masque as a pre-poo treatment to detangle and soften hair. In the shower, separate your hair into four sections, apply the Masque from root to tip, and use your fingers to comb it through before following with shampoo and conditioner. Next, section damp hair into four parts again, and apply the SheaMoisture Coconut & Hibiscus Frizz-Free Curl Mousse all over. “It adds moisture to the curls while setting them, and it helps eliminate frizz and boost shine,” Thomas says. Use fingers to evenly distribute the mousse, and then dry using a diffuser.

Trying out Christmas aquarium nails! | Aquarium nail tutorial
The 11 Best Press-On Nails That Will Make You Want to Talk With Your Hands
12 Must-Have Alo Leggings to Get for Up to 40 Percent Off at Their Holiday Sale
This Bodyweight Move Is the Perfect Combo of Cardio and Core Work
La Patiala’s Kristen Shirley Shares Her Favorite Luxury Watches