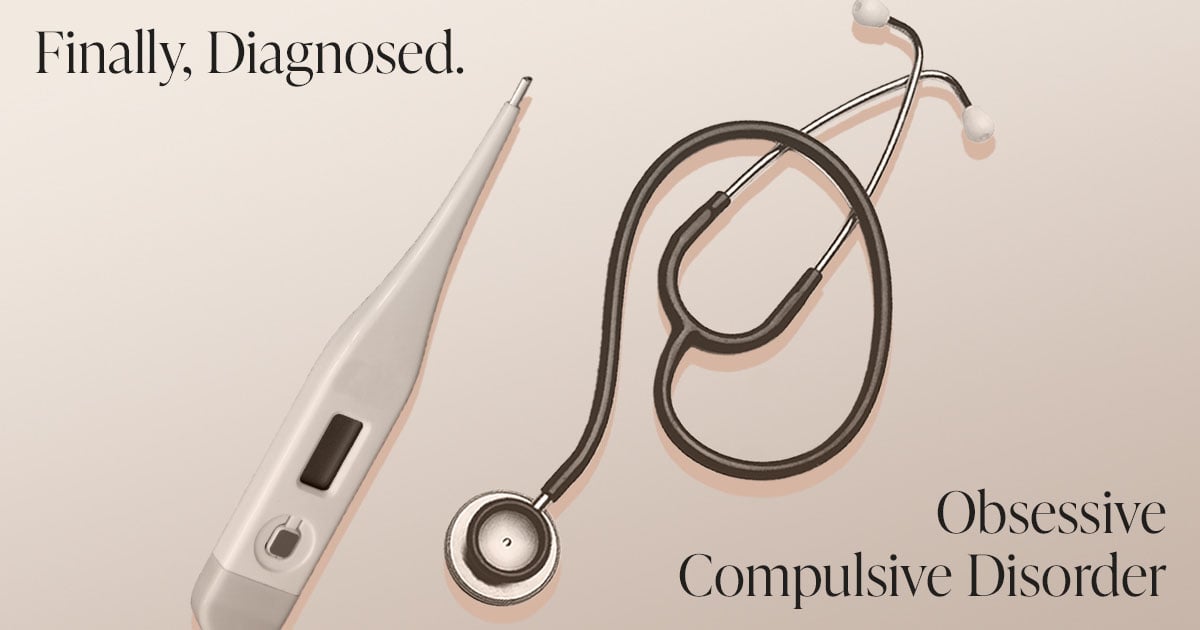 Each year in the US, an estimated 12 million adults who receive outpatient care are misdiagnosed, and oftentimes those patients fall within a minority identity, including women, non-white Americans, and those within the LGBTQIA community. That’s why we created Finally Diagnosed: a monthly series dedicated to highlighting the stories of those who’ve been overlooked by their doctors and forced to take their health into their own hands in order to get the care they deserve.

Alexandra Reynolds, 40, thought a lot about death as a kid. Today, she refers to those thoughts as existential ruminations. “I was especially preoccupied with something happening to my mother. I felt like I needed to be with her all the time to protect her,” Alexandra tells POPSUGAR. “I remember having a lot of meltdowns about that and my parents really not understanding what was going on and why I wouldn’t just be a normal child.”

In addition to intrusive thoughts about death, Alexandra says she began doing symmetry compulsions (or ordering and organizing items in a particular order) and making lists excessively as early as age 6. But back then, she didn’t have the perspective and vocabulary she has now — she had no idea her behaviors and thought patterns were actually symptoms of OCD, and she struggled to find understanding and support.

“I just knew that I felt like I had this fear and almost like this darkness inside of me that made everything awful.”

“My family’s Hispanic. I’m Puerto Rican. And in our culture, there is still a very huge stigma around mental health,” Alexandra says. “In my family, it was very much frowned upon to receive mental health treatment. My parents would often say things like, ‘Oh, you know, that kind of stuff is for people who are sick in the head, and you’re not sick in the head’.” Deep down Alexandra knew something was off, but she didn’t have the language or the outlet to properly express herself, she says. “I just knew that I felt like I had this fear and almost like this darkness inside of me that made everything awful,” she says.

She wound up seeing a therapist for the first time at age 18 after a suicidal episode. She was taken to the hospital and put on a 72-hour watch. “And they had me talk to someone at the hospital. But I wasn’t diagnosed with OCD — I was just diagnosed with depression and what they called psychotic depression,” Alexandra says. They thought she was suffering from psychosis, but “it actually was my intrusive thoughts,” Alexandra says. Half of obsessive compulsive disorder cases are misdiagnosed, according to a study published in the Journal of Clinical Psychiatry.

Alexandra called the entire experience “really scary.” And when she was discharged, she promised herself this: “I am never going through that again. I’m not talking to anybody about my mental health.”

But in her early 20s, Alexandra’s OCD symptoms became harder to ignore

“I started to have a lot of health anxiety, which looked like me going to the ER for symptoms that I thought I was having,” like that of a heart attack, Alexandra says. She also had obsessive thoughts around having cancer, and other fatal and sometimes rare illnesses. “I would constantly check myself for symptoms,” Alexandra says.

She was in college at the time and began to have obsessions over her classwork. “My schoolwork took a really long time to do because I would do it over and over and over again, trying to get it perfect,” Alexandra says.

“No one understood what I was going through or why I had all these fears, and why I was so anxious and concerned about everything all the time.”

Over time, her symptoms got worse. Eventually, she got so overwhelmed and frustrated that she took time off of school. “It was too much,” she says.

Her worst obsession involved driving. While behind the wheel, Alexandra would begin to think: “I’m going to have a heart attack, and not be able to control my car, and I’m gonna hit somebody with it, and we’re all going to die.” These thoughts would lead to a panic attack, which reinforced Alexandra’s fear. “And so driving became super, super hard for me,” she says.

“No one understood what I was going through or why I had all these fears, and why I was so anxious and concerned about everything all the time.” People would tell her to relax, calm down, get over it. But “I couldn’t stop the thoughts,” Alexandra says. So, she finally decided to seek help through a therapist.

By her mid-20s, Alexandra received her first OCD diagnosis

The therapist Alexandra saw diagnosed her with obsessive-compulsive disorder, which she says was difficult to hear, but also provided a sense of relief. Unfortunately, that therapist offered limited treatment for obsessions and compulsions: mainly direct exposure treatment, which can help some people with OCD, but which Alexandra didn’t find useful.

Alexandra stopped seeing that therapist and was left struggling to understand her new diagnosis without any support. “I think ‘Monk’ was on TV at that time,” she says. “And so there was all this stigma around OCD as being just this cleaning disorder, and people with a million bottles of cleaning supplies in their house and whatnot.” Alexandra did have cleaning compulsions, but she didn’t feel fully represented by what she saw on TV. “I just felt like no one took this diagnosis seriously. And so maybe I shouldn’t either,” she says.

For the next few years, Alexandra tried to “white knuckle” her way through life. “I would do compulsions 24 hours a day, seven days a week. I was practically trapped inside my own home and only left for short periods of time. And if I did leave, I’d come home and shower for 45 minutes.”

She would get into a pattern where she was stable for weeks or months at a time. “But eventually I would kind of have a period where I crashed and burned. And, you know, that might look like not doing so well in a class, or having a really bad depressive episode. Or a couple of times I attempted suicide, because my disorder was still raging.” By the time she reached her mid-30s, she decided “something has to give, because I can’t keep living my life this way.” And with that, she sought out an OCD specialist.

Diagnosis wasn’t the end of the journey for Alexandra

This time, she found a specialist: one that made her feel seen. She felt both relief and frustration. “I felt like, OK, I found the right person, right. And so, maybe, this is gonna help me get better. And that was amazingly relieving,” Alexandra says. But there was also a profound sense of frustration and anger coming to grips with the gravity of the disorder.

“Because there are other mental illnesses that I think because of hard work by advocates and nonprofits, the stigma is lessened, and people take them more seriously. But OCD is still just not taken seriously. So I just felt very frustrated that this was my cross to bear — this illness that everyone makes fun of, but had basically destroyed my life,” Alexandra says.

But she worked with the specialist on exposure and response prevention and “that made all the difference.” Since then, “I’ve actually held down a job for many, many years, and got married, and have a child and did all these things that I never thought I’d be able to do because of OCD — things that I was afraid to do, or things that honestly I just couldn’t imagine because I couldn’t keep myself stable enough to do them.”

Still, OCD continues to be an everyday challenge for Alexandra

“I will still get stuck in obsessions. And I will behave in ways that are very irrational,” she says. The pandemic, for example, was a major trigger for her OCD. “I spun really out of control after they talked about this new illness called COVID and how awful it was,” Alexandra says. For someone who has long faced obsessions about her health, the reality of life in a pandemic was incredibly stressful. Then she, her husband, and her son all ended up testing positive for COVID, an event that worsened her symptoms even more.

It was during this time, however, that Alexandra recommitted to therapy and found an online community that helped her feel less alone.

She learned tools that helped her manage her symptoms, like redirecting obsessions by performing helpful actions for her son or husband. And she built a support network that kept her out of her own head. “Anything to kind of keep me from isolating myself and just becoming one with my thoughts,” Alexandra says.

Her advice to others battling OCD? Don’t give up

While getting a diagnosis and finding help can bring you a sense of relief, they’re also both a privilege and difficult for many to attain, Alexandra says. “So I would say utilize the resources that you have and build on that.” She suggests utilizing nonprofits like the International OCD Foundation (IOCDF), which offers free and low-cost resources and support groups, and reaching out to providers to see if they offer a sliding scale for treatment.

“I just want people to know that there is so much hope on the other side of OCD,” Alexandra says. After going through treatment and finding community, “life can be so much richer and beautiful than you ever imagined, even when you’re scared and doing things.”