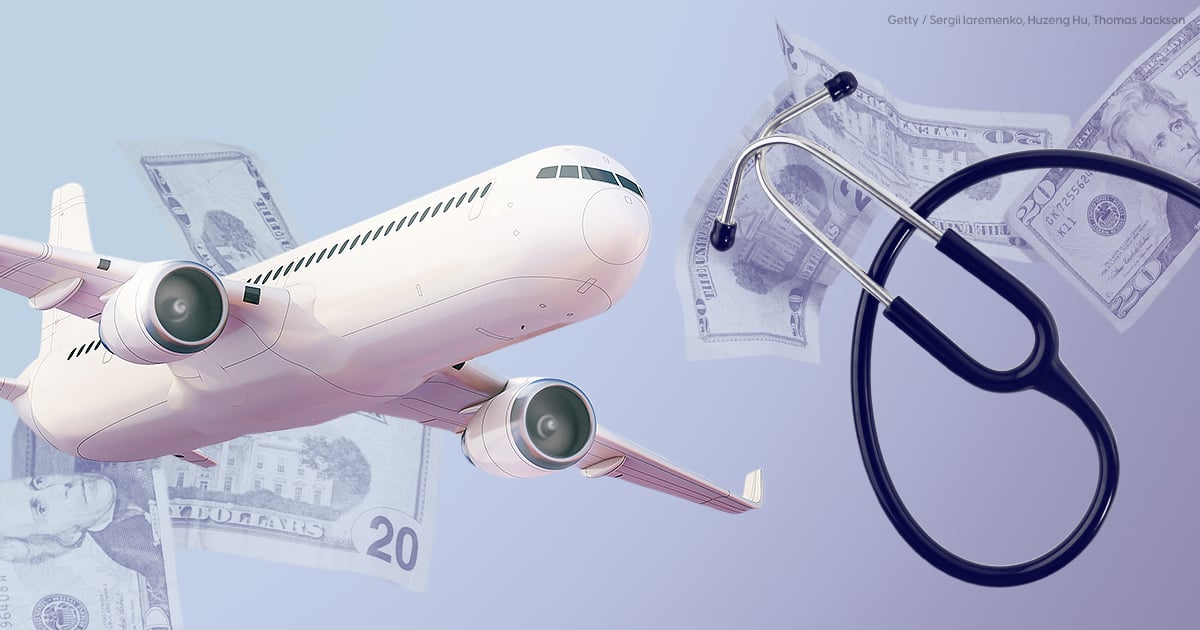 This article is part of POPSUGAR’s project Roe, 50 Years Later, a collection of stories marking what would have been the 50th anniversary of Roe v. Wade. This moment comes more than six months after the Supreme Court struck down the constitutional right to an abortion in Dobbs v. Jackson Women’s Health Organization, and these stories seek to mark the past, present, and future of abortion access in America.

On the day of her abortion in 2007, Alanna showed up to the New Mexico clinic with an envelope full of cash. Then just 17 years old, Alanna “didn’t have a credit card or a debit card or anything,” she tells POPSUGAR. When she’d learned that her abortion would cost several hundred dollars, she’d had to ask friends, coworkers, and even a teacher for help.

What she ended up bringing to the clinic “was just all this money that my friends had given to me.” It was enough — just. During the procedure, Alanna turned down the option for anesthesia, solely because it would have cost more.

Alanna participated in POPSUGAR’s “50 States, 50 Abortions” cover story, in which we spoke to 50 people who had an abortion in America — one in each state. The stories that make up the project create a striking mosaic. Each individual’s experience is unique and personal. But taken together, they form a bigger picture that starkly shows the barriers presented by the antiabortion bans and stigma in the US.

Cost was by and far the most common hurdle people confronted. Storyteller after storyteller shared that they, like Alanna, went without anesthesia to save money. They described racing against the clock to get an abortion before their pregnancy progressed and it became more expensive, sometimes being forced to make agonizing health decisions in a matter of hours. They talked about borrowing money from abortion funds, friends, family, and partners to pay for the healthcare.

“Your whole life, you grow up believing abortion should be accessible, but nobody tells you that it’s going to cost you about $900,” a storyteller from Nebraska says. This person’s friends ended up putting together a GoFundMe to cover the costs of the procedure, gas, and food.

At a time when abortion is banned or soon to be banned in 24 states, talking about the expense of the procedure may seem beside the point. First, let’s ensure abortion remains legal; then we can turn our focus to cost.

But the right to choose abortion means nothing if the healthcare isn’t also accessible, and antiabortion legislators have intentionally used financial barriers as a way of limiting access to the healthcare since Roe was first passed.

We asked experts why abortions are so expensive, what the downstream effects of these high healthcare costs are, and whether we may see a world in which affordable abortions are available for all in the near future.

Why Are Abortions So Expensive?

Between 2017 and 2020, the average cost of medication and first-trimester surgical abortions (the two most common types) increased from $495 to $560 (13 percent) and from $475 to $575 (21 percent), respectively, according to research in the journal Health Affairs. What’s more, “the proportion of facilities that accept insurance decreased over time (from 89 percent to 80 percent),” the researchers note.

As of 2022, Planned Parenthood estimates that the average cost of medication abortion or an in-clinic, first-trimester abortion is about $800, though it notes that cost varies by state, the type of care you need, and your insurance coverage. Second-trimester abortions are often much more expensive, ranging from $715 earlier to $2,000.

“Abortion is expensive because capitalism is a real thing.”

Antiabortion regulations are a large piece of what drives up costs. “Every year, there’ve been increasingly more restrictive pieces of legislation introduced around abortion,” Oriaku Njoku, executive director of the National Network of Abortion Funds, says.

The providers that perform the majority of abortions are independent — meaning they’re not part of Planned Parenthood, a hospital, or another health system or network, Njoku says. The Abortion Care Network reports that independent clinics perform 58 percent of all abortions nationwide, 60 percent of abortions that take place after the first trimester, and 79 percent of those that take place after 22 weeks. The clinics are effectively small businesses, which means that when they have to spend money to meet increasingly punitive regulations, they have to raise the price of their services in order to make ends meet.

Also at play are “additional insurance costs, rising costs of medicine, and additional security that’s required, because of the violence that comes from folks in the antiabortion movement,” Njoku says. “These are all additional costs that providers have to take into account when providing abortions.”

But the actual procedure is only part of the total expense of getting an abortion — there’s also travel, child care, and lost wages to consider, especially for people who have to travel out of state due to restrictive bans where they live.

“I had to drive an hour each way to my closest Planned Parenthood for each appointment. I had to find somebody to watch my kids for the appointment. I was the breadwinner of my family . . . and I had to take time off of work that was not paid, so I had to lose a week or so of income,” Shay, the Pennsylvania storyteller in our “50 States, 50 Abortions” project, says. This is on top of the $500 that the abortion cost. “I was 28 and made $13.10 an hour. I’m a working-class person,” they say.

That was in 2018. As of January 2023, 58 percent of women ages 13 to 44 currently live in a state that’s extremely hostile to abortion rights, the Guttmacher Institute reports. This means more people than ever are having to travel farther distances or take multiple days off work to access care — in other words, the financial burden is only increasing.

Another factor to consider is inadequate insurance coverage. In a 2014 study of 8,380 people who’d had an abortion, 35 percent had Medicaid insurance coverage, the Guttmacher Institute reports. Yet 53 percent of respondents said they’d paid for their abortion out of pocket; only 24 percent used Medicaid to pay for the procedure.

That’s largely because of the Hyde Amendment, which was passed in 1976, just three years after Roe was first ruled on. Hyde prohibited federal Medicaid funds from being used for abortion, except in cases of life endangerment, rape, and incest. As of January 2023, 33 states and DC follow the Hyde Amendment, the Guttmacher Institute reports.

“This is an opportunity and a time to really reimagine what it looks like to provide access to basic healthcare in this country.”

“We’ve seen studies show that restricting Medicaid coverage of abortion forces one in four low-income people who are seeking an abortion to carry an unwanted pregnancy to term,” Morgan Hopkins, the president of All* Above All and All* Above All Action Fund, says. “The negative financial impacts of being denied an abortion have been found in research to persist for years. So in terms of what the impact can be, it’s absolutely about economic security.”

Hyde specifically targets low-income people and disproportionately affects people of color, young people, immigrants, or people living in rural communities, experts say. “It’s a racist and discriminatory policy,” says Danika Severino Wynn, CNM, vice president of abortion access at Planned Parenthood. An All* Above All fact sheet notes that “58% of women of reproductive age enrolled in Medicaid or CHIP live in states that ban Medicaid abortion coverage for abortion except in limited circumstances. 51% of these enrollees are women of color.”

But Hyde is not a law, Njoku emphasizes. It’s an amendment that has to be added to the federal spending bill — and it has been, every year since 1976. Until 2021. “Thanks to the leadership of some of our partners, like All* Above All, there have been ongoing pushes to end the Hyde Amendment. The Biden-Harris administration has been the first in decades to exclude it from its presidential budget,” Severino Wynn says. Unfortunately, the Senate reinserted the amendment, and the budget in March 2022 included it. (More proof that your vote matters — a lot.)

Economic impacts, whether because of Hyde or other barriers, make for a frustrating and surreal reality. Shay, for instance, already had two children and “didn’t have the means to have more . . . to do so would’ve caused the lives of my current living, breathing children to suffer.” And yet they had to borrow money from an abortion fund and their mother-in-law in order to pay for their abortion. Our Nebraska storyteller, who turned to GoFundMe to pay for their abortion, recalls “thinking what it would be like if I had a baby and couldn’t afford diapers or formula.”

Will Free Abortions Ever Be a Reality?

At a protest in New York City on June 24, 2022, the day the Supreme Court overturned Roe v. Wade, the crowd chanted, “Free abortions, safe abortions, my body, my choice” to the tune of “Na Na Hey Kiss Him Goodbye.”

At the time, with trigger laws taking effect and many states already rushing to pass near-total bans on abortions, the concept of free abortions never felt further away.

“This is a long game and it’s gonna take a lot of work.”

Even before the overturn of Roe, however, the issue wasn’t so simple. “I’m that person who’s like, yeah, all abortions should be free,” Njoku says. “At the same time, folks who are providing abortion care and doing abortion funding work should be compensated and paid for their hard, emotional work. Clinic workers are on their feet for 12 hours a day with one operating room providing service for 60 patients coming in. You can’t do that for free.”

Njoku highlights the need to use a reproductive-justice framework when considering abortion costs. “We cannot look at abortion in isolation without thinking of the social context that we live in and how it overlaps with all of these other issues that impact our lives every single day,” they say.

“You really do have to look at the situation holistically to think, where are these costs coming from? But also, regardless of costs, why can’t people afford basic healthcare? Abortion is expensive because capitalism is a real thing. It’s expensive because of the targeted regulation of abortion providers,” Njoku adds. “That’s why, to me, things like getting rid of the Hyde Amendment is so important.”

In addition to supporting organizations like All* Above All that are fighting against the Hyde Amendment, one of the most impactful steps people can take to alleviate the financial burden of abortions is to support local abortion funds, which “help people pay for their abortions, and they can also help with logistics around transportation, lodging, and child care,” Severino Wynn says. You can find a local fund via the National Network of Abortion Funds.

And don’t discount on-the-ground work, either. “Having those courageous conversations around abortion, wearing a T-shirt that says ‘everyone loves someone who has an abortion’ while you’re doing your groceries — the destigmatizing work is going to start to create that culture shift around abortion,” Njoku says.

“This would have been the 50th anniversary of Roe. But Roe was never enough,” she adds. “It never guaranteed accessibility, or availability, or even the fact that abortion is acceptable in this country. So this is an opportunity and a time to really reimagine what it looks like to provide access to basic healthcare in this country.”

Abortion activists agree: the war hasn’t been lost. “This is a long game and it’s gonna take a lot of work, but that kind of work and investment is so worth it, so don’t be discouraged,” Njoku says. “It’s a hot mess, but we’re gonna do the work and we’re gonna win.”