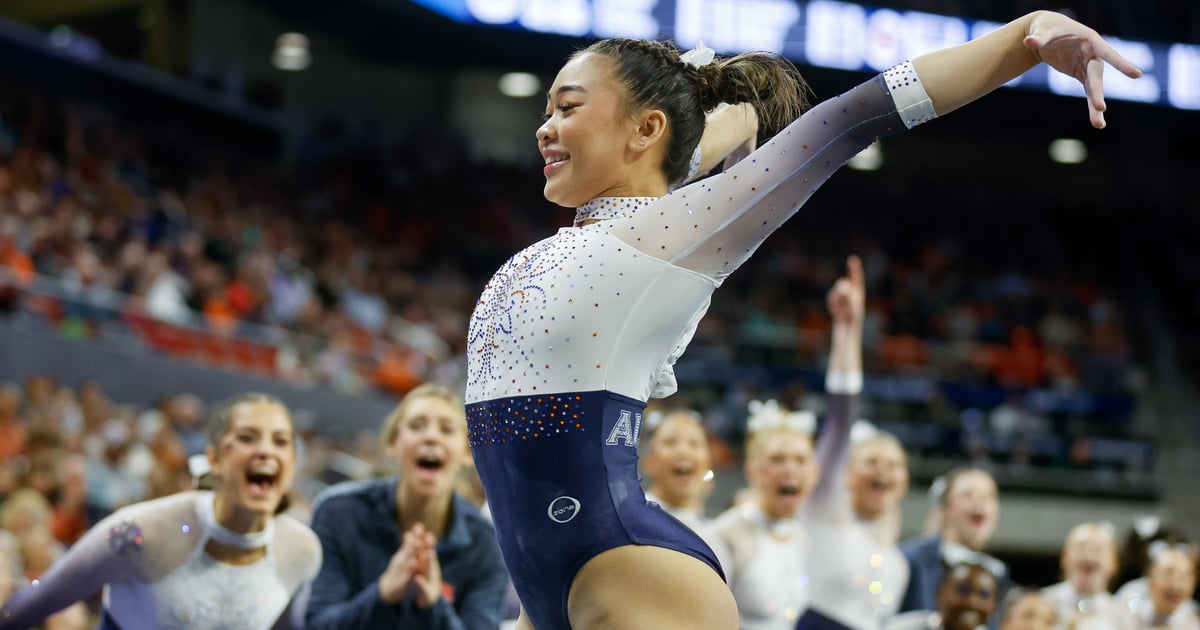 Sunisa “Suni” Lee’s new floor routine is something you don’t want to miss. On Jan. 20, the Auburn gymnast and Tokyo 2020 Olympic all-around gold medalist competed in the floor event during an NCAA meet against Arkansas, showing off her new routine for the first time. In the end, it earned her a 9.975, the highest floor-exercise score at the meet.

The routine began with an impressive double layout and ended with two full twisting layouts. The near-perfect score didn’t satisfy the crowd, who were chanting for a perfect 10. Lee, however, was happy — especially since she’d only been working on the routine for a short time. Her teammate had apparently just choreographed it for her a few days prior. “We [choreographed] this routine in two hours, literally two days ago,” Lee told ESPN with a laugh after the meet. “I absolutely love it.”

“A name like Suni Lee, she could get any choreographer in the world to choreograph her floor routine, it’s not just another routine. This routine will get so many eyes,” voiced an ESPN commentator during the broadcast. “But Suni herself requested that her teammate Gabby McLaughlin do this choreography. And Gabby is actually a walk-on. She is currently paying her way to be a student-athlete, and now she’s choreographing for one of the biggest names in gymnastics. Really special.”

Lee, 19, is currently in her sophomore season at Auburn University. In addition to securing the top spot in the floor exercise, she was also the highest-scoring athlete for bars and vault. “It felt amazing to be back home in front of the crowd,” Lee said, according to Auburn Undercover. “It was an absolutely amazing environment. It felt so positive. It felt really good to be back with the family.”

In November, Lee announced that this would be her final college gymnastics season before she returns to full-time elite training to defend her gold medal at the Paris 2024 Olympics. “I’m so excited to share that after this season I will be returning to elite gymnastics,” Lee shared in a video posted to her social media channels. “I have my sights set on Paris 2024, and I know what I have to do to get there.”

After returning from the Tokyo 2020 Olympics, Lee had to work on embracing stardom. “All eyes are going to be on not only me, but my whole college team,” Lee said in a November 2021 interview with POPSUGAR.

Besides leading the Tigers to victory over Arkansas in their home opener, the star gymnast finds herself No. 5 in the all-around NCAA rankings heading into the third week of competition. When ESPN asked what she thought the team could achieve this year, Lee replied, “the unthinkable.”